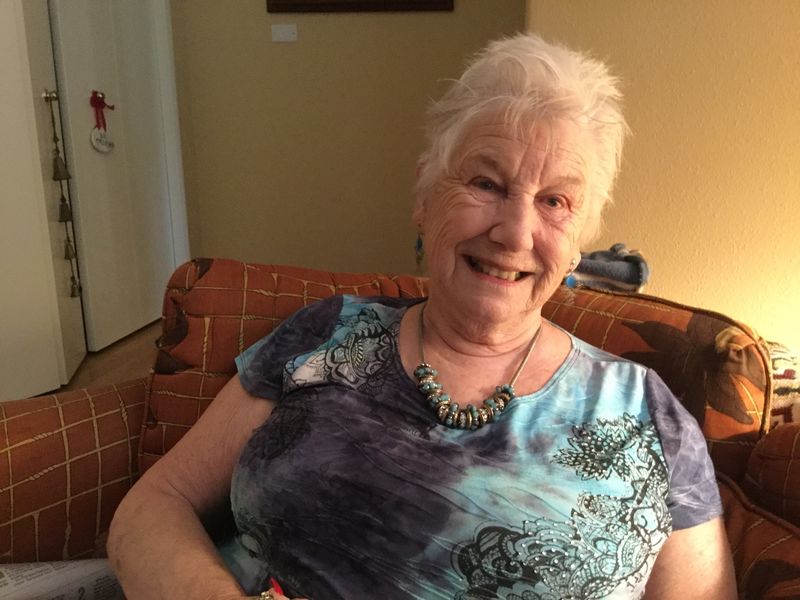 Barbara Eileen (Mallory) Goodin passed away peacefully at age of 85 on October 25, 2020 in Vancouver, Washington. She was born on November 15, 1934 in Portland, Oregon. Her parents were Dallas Bellinger Mallory and Nora Eileen (Creed) Mallory. Barbara lived with her parents in Cascade Locks until the age of seven when they moved to Bremerton until she was 11. She carried fond memories of spending time with her mom and dad during her early childhood. After her parents divorced, Barbara lived with her mother and attended secondary schools in Portland and Santa Monica.

Barbara attended Portland's Lincoln High School, graduating in 1952. When she was 16 Barbara met Phillip Creig Goodin on a blind date and they fell in love. According to Barbara, the very best day of her life was on her 18th birthday, November 15, 1952, when she and Phil were married in Portland.

The loving young couple initially lived in Parkrose, but soon afterward moved to Tigard where they settled and raised their family. By 1959 Barbara and Phil had been blessed by four daughters. Barbara loved being a wife, mother, and homemaker. While the girls were growing up, she kept the Goodin household running smoothly and happily without today's modern conveniences. As a young mother, Barbara taught herself to sew and especially enjoyed sewing matching family outfits: dresses for her and the girls and shirts for Phil! During these years, Barbara was also a dedicated Girl Scout Troop leader. She enjoyed planning and leading activities, games, crafts, and many camping adventures for innumerable appreciative young girls and earned her 10-year volunteer pin.

In 1970, Barbara and Phil welcomed a son into their family. Having a houseful of teenage daughters and a baby wasn't always easy, but Barbara enjoyed those hectic times and continued volunteering with youth in the community. During the next several years she and Phil were the high school youth group leaders for Tigard United Methodist Church. Her and Phil's love, positivity, enthusiasm and acceptance helped many teenagers navigate successfully during those difficult ages. As a testament to her influence, many of the "kids" from that era still lovingly call her Mom.

Barbara also became a business woman. Her creativity and love of sewing and crafts evolved into "Happy Happenings" which she happily ran for many years. During this time, Barbara, an only child, also became increasingly responsible for her aging mother while at the same time began being blessed with grandchildren whom she enjoyed immensely. Family was very important to Barbara and consequently she always planned and hosted holiday get togethers, birthday parties, and camping trips in order for her growing clan to stay connected.

In 1991, Barbara and Phil moved from Tigard to a log home they built in Welches on Mt. Hood. While there, Barbara volunteered for the Forest Service pleasantly greeting and guiding visitors to the beautiful Mt. Hood area where her family had camped over the years. Upon Phil's retirement in 1996 they sold their home and became fulltime RVers. During the next few years, Barbara relished her and Phil's time and travels together throughout the United States. She loved having Dad 24/7 while participating in craft fairs, campground hosting and making new friends wherever the road led.

Upon Phil's untimely death in 2000, Barbara began a new chapter in her life. At age 65, she began dancing, playing poker, driving a convertible and wearing bling! She also continued her craft shows and volunteering. Barbara was a Candy striper and also joined the Vancouver Elks Club, volunteering with the Emblem Club. During her 70's and up to her very last days, the Elks became her go-to place, getting everyone up on the dance floor and making new friends laugh and adore her. It was there she met Roy Lyle, an appreciated companion she joked with for several years before his passing in 2019.

Barbara's family was her most important possession. She maintained a close relationship with her growing family and visited her children, grandchildren and greatgrandchildren as often as possible. Mom would still always bring special gifts, enjoyed playing games, and having sharing circles. She was always the star of the gathering and all the kids loved their Granny!

Barbara enjoyed people and living fully. She was known for talking to "anybody" and loved making others laugh, always with a twinkle in her eyes. Family and friends will all miss her greatly and are blessed with an abundance of loving memories to hold in our hearts. Barbara is survived by her five children, Suzanne(Frank Stackhouse, deceased) Goodin; Jenny (Joe) Keller; Debby (Al) Doman; Patty (Jerry Elder) Goodin; Ken (Michelle) Goodin; ten grandchildren, Chad (Paula), Ryan (Amanda), Jeremy (Alison), Weylin, Jason, Joselyn (Curt), Janelle (Ryan), Unity (Joe), Spencer, Reece; 18 great-grandchildren; one brother-in-law and two nieces. She was predeceased by her husband and both parents.
To order memorial trees in memory of Barbara Eileen Goodin, please visit our tree store.
Send a Sympathy Card