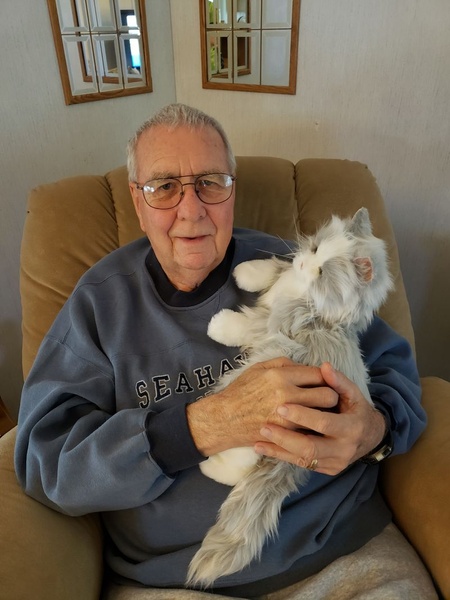 Dan Crisp was born on May 9, 1937 to Melvin and Vera Crisp in Aberdeen, Washington. He graduated from Wishkah Valley High School and went into the Navy at that time. He passed away peacefully on December 27, 2019 at Grays Harbor Community Hospital with his wife and step son Michael by his side.
Dan is preceded in death by his Father Melvin, Mother Vera, Sister Bonnie, Brother Jim, Daughters Suzanne and Sheila, and Granddaughter, Joanne. He is survived by his wife, Cynthia, Two step-sons Michael and Matthew Cleland, Daughter in Law Cathy and a grandson Robbie Crisp. Along with several nieces and nephews,
Dan served in the Navy as an air traffic controller at North Island at San Diego, California. When he got out of the service he was an air traffic controller for a while at what is now SEATAC.
Later he went to work for the Grays Harbor Sheriff Department where he was the resident Deputy at the beach. Dan retired from Grays Harbor Sheriff department in 1986. Dan loved his work so much that he always was looking out for those in need. When he was diagnosed with Alzheimer's, towards the end, the only thing besides being in the Navy that was constantly part of his daily and nightly routine was to check beds, doors and escort residents to their rooms at home and at Riverside. Always on duty as he would tell his nurses and the staff at Riverside. He gave out tickets to speeders. I guess in their wheel chairs. Who knows, that was his reality.
After retiring from the Grays Harbor Sheriff Department, Dan and his wife started a computer store in Aberdeen called Computer Advanced Technology located on Wishkah and I streets. Later Dan and his wife and sons moved to Bremerton. The computer store went with them. In 1995 Dan had a 4 way by pass. The computer business had to close as it became to much for him to manage. His wife was working at Olympic College where eventually Dan became employed as, you guessed it, a Security Guard. He continued to work there until his wife retired from Olympic College.
His next journey was spending the next 15 years going to Yuma Arizona for the winter. His wife worked for Friendly Acres RV Park where they spent their winters. Dan started a computer club to help and assist those residents with their computers. He loved the weather, shuffle boarding, helping other residents, and just being a friend. Dan received many trophies while playing shuffle board.
Dan loved to ride and in his earlier years race motorcycles, fly airplanes, snow mobile, river raft, play cards and travel with his wife and sons.

There will be a celebration of life for Dan at the Montesano Presbyterian Church at 1pm on January 18, 2020. A reception to follow at the church.
To order memorial trees in memory of Daniel Graham Crisp, please visit our tree store.