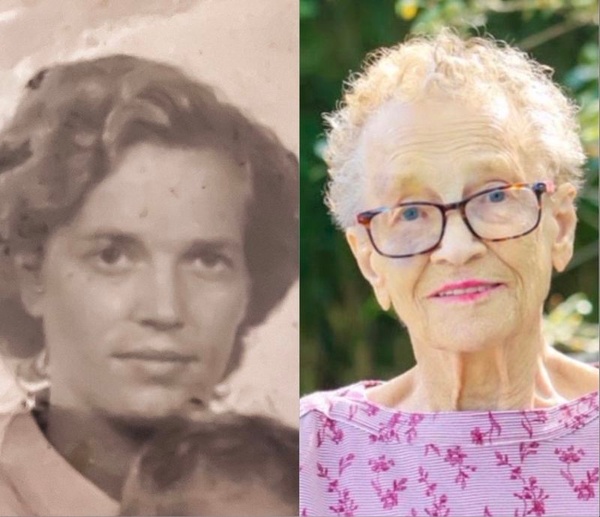 Delores Mae Haggins of Tieton Washington was born on June 19, 1930 and passed away peacefully on September 14, 2021 with her family by her side.

Delores spent her early years growing up in Colorado and blessing her two younger brothers, Jimmy and Myron and her Grandma Myrtle with her presence. There she met a young Airmen named Samuel J Haggins. She gave him the honor of allowing him to marry her on June 21, 1950. Delores and Sam raised 4 allegedly perfect children in the catholic tradition as they crisscrossed the United States and the world, moving from one duty assignment to the next. If you ask her, she was the sole reason that anything got done. When Sam retired from the Airforce, they moved the family north to Alaska where they spent over thirty adventurous years enjoying life in the last frontier. While in Alaska, they welcomed 6 grandchildren into the world, spending much of their time instilling a sense of right, wrong, and wit in the newest generation. Never wanting to be far away from family, they followed their children and grandchildren to the lower 48, landing in Washington. Over the next 20 years they became Great-Grandparents to 9 "not so bad looking kids."

Throughout Delores' life, she enjoyed drawing and art. A thespian at heart, she enjoyed movies, television, singing and above all else, the late great Marty Robbins. Delores had a great love of world history. She was intrigued by the possibility that there was alien life out there. She enjoyed tending to her garden and doting on her many beloved pets. An adventurous spirit, she also enjoyed the great outdoors, roller coasters, and big water slides (the kind that are 4 stories tall that go straight down). There isn't much that Delores would do for a klondike bar, but she would do nearly anything for a Starbucks' chai tea. A fashionista who wouldn't be caught without her hot pink lipstick, Delores was an avid shopper and would never dress (or act) like a "Betty Crocker grandma." Above all she was devoted to her family. Her children, grandchildren, and great grandchildren loved Delores for her great wit, integrity, love of laughter, and independent spirit.

There will be a viewing for immediate family September 19th in Prosser, Washington.
To order memorial trees in memory of Delores Mae Haggins, please visit our tree store.