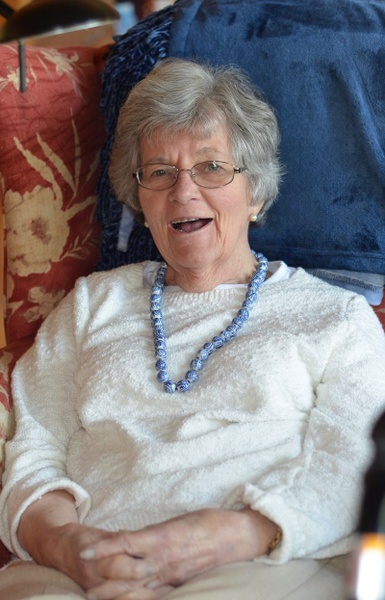 Elinor Paulk, 86, of Silverdale Washington passed away on October 1st, 2019.

Elinor was born in Portland, Oregon to Katherine and Watt Long on July 20, 1933.
She attended the University of Nevada – Reno, where she was a member of the Gamma Phi Beta sorority, and graduated in 1954 with a degree in Home Economics. She met her future husband of 59 years, John Paulk, a young Navy Lieutenant from Kansas, at a USO dance in San Francisco in 1956.

After their marriage in 1957 in San Francisco, Elinor filled the role of a Naval Officer's wife, and mother to 3 sons; David, John & Brian.

John Sr.'s naval career took Elinor and the family to many interesting and beautiful locations across the country and Pacific including Sasebo, Japan; Monterey, CA; Bremerton, WA; Long Beach, CA; Yokohama, Japan; Washington, DC; and finally Geneva, IL. It was while stationed at the Puget Sound Naval Shipyard that John and Elinor fell in love with the Pacific Northwest and decided to one-day build a home and retire to the area. Through it all, Elinor was a devoted and capable wife, mother and quintessential trooper, raising three boys at times by herself while her husband was deployed. Her love for adventure and the outdoors led her on many camping trips with the boys and on one occasion to drive a VW micro bus up Mt Fuji while the family was stationed in Japan.

Elinor always had a passion of music and the piano. She was so good that her advanced piano instructor suggested Elinor begin teaching piano lessons as well, which she did for many children over 20 years.

Upon John's Sr.'s retirement the couple moved to Seabeck, WA and built their dream house high on the forested bluffs of the Hood Canal. Elinor loved nature, enjoying the beautiful rhododendrons, native birds and other wildlife that shared their woods. The couple became a fixture in the community where Elinor was an active member in her local PEO chapter and served as Treasurer for the Bremerton Symphony League. They hosted many League functions and Christmas parties at their beautiful home.

John Sr. passed in 2017 and she remained at the home they built and loved together until she could no longer. She will be remembered as being very warm, generous and good-humored. She was always kind and gentle, willing to lend an ear and a dear friend to many.

Internment will be at the Tahoma National Cemetery; Kent, Washington on the afternoon of Nov 1st at 1:15 PM.

A celebration of life for family and friends will be held the following afternoon at 12:30 PM at the home in Seabeck.

Donations in Elinor's memory can be made to the Bremerton Symphony Association.
To order memorial trees in memory of Elinor Long Paulk, please visit our tree store.
Send a Sympathy Card