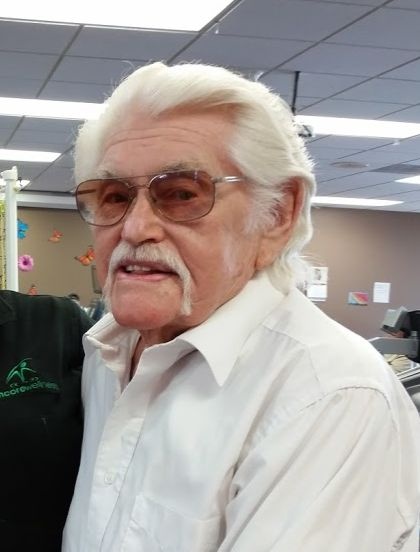 His Celebration of Life will be announced at a later time, when it is safe to gather again, due to Covid-19.

He was born in Penn. on Dec. 17, 1921. At age 5yrs. Frank and his family moved from Pennsylvania to East L.A. California.
He served in the Navy during WWII at the U.S. Navy Hospital, San Diego as a Hospital Apprentice 1st Class
and received an honorary discharge.

He married Connie and had sons Frank and Donn. He later married Rose and had Linda and Mark.
He worked at Reliable Trucking and enjoyed hunting, racing his motorcycle and taking his boat out fishing and trips to
Catalina island.

He later worked at Lucky's Markets as a truck driver and retired in 1986.
In 1987 he met his current wife Carol while working at her Father's Camera Repair shop.
They were married in 1989. They joined a singing group and sang at Retirement homes, City of Hope and Nixon Library.
His favorite get away was camping along the Kern River in his motorhome in Kernville, Calif.

He lived his life his way and loved tell his stories, we will be truly missed.

Those we love don't go away, they walk beside us everyday. Unseen, unheard, but always near. Still loved,
still missed and very dear. Death leaves a heartache no one heal, love leaves a memory no one can steal.
To order memorial trees in memory of Frank Lee Miller, please visit our tree store.