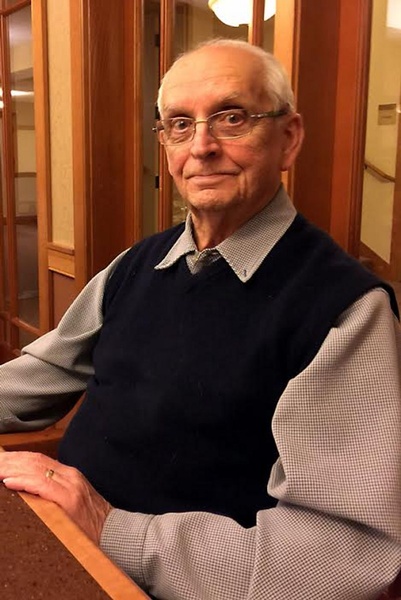 Gerald (Jerry) Albert Roux died on May 25, 2021 at age 91 of complications from Idiopathic Pulmonary Fibrosis (IPF). He was born March 23, 1930, in Detroit, Michigan, to French Canadian immigrants Eva (Latulippe) Roux and Nathe Roux. Jerry was the oldest of four boys and his memories growing up included happy times with his brothers Roland, Claude, and Denis and his cousin Leo, trips to Canada to see cousins and to make maple syrup, playing in the house his dad built in Detroit, working as a carpenter with his family, and enjoying the St. Monica's youth program where he met the love of his life, Josephine (Jo) Frances Stack. They married on September 8, 1951.

Shortly after his marriage, Jerry was drafted into the Marines, serving as a radio mechanic for a helicopter unit stationed at Cherry Point, North Carolina. After his discharge he used his GI benefits to attend the Radio Electronic Television School (RETS) in Detroit, preparing him for a career in Electrical Engineering, which allowed him to do the work he loved and to support his growing family.

Starting his remarkable career at Chrysler, Jerry was involved in many projects in fields as varied as electrical communications, lasers, and statistics. He was involved in the development of the Redstone rocket, which powered America's first manned space flight, and the Lunar Rover, which went to the moon with the Apollo missions. Jerry's work took him to many parts of the country, moving the family thirteen times over six states. In 1969 Jerry settled at Boeing in Seattle and established the family residence in Auburn. Boeing prized his expertise and ability, and kept him busy with a multitude of projects. He retired in 1990.

Jerry spent his retirement years supporting his wife and her many volunteer activities within the South Sound Community, as well as doing volunteer work with their church, Holy Family in Auburn. Jerry and Jo loved to travel and made trips to Indiana, Michigan, Canada, France, the UK, Israel, and Ireland. They enjoyed countless Alaskan cruises. Their favorite activity, however, was visiting with their family, which grew to over seventy members. Jerry always had a soft spot and warm welcome for the latest arrival. After Jo developed a degenerative disease, which left her legally blind, Jerry spent years lovingly caring for her. Jerry and Jo moved to Wesley Homes Lea Hill and enjoyed socializing within their new community. Jo's disease eventually led to vascular dementia and death in 2015. They had been married for over 63 years. After Jo's death, Jerry chose to spend the final years of his life at Wesley Homes, and found friendship and companionship with fellow residents, notably Marian Thomas and Corinne Garland.

Jerry made the world a better place for those who knew him. He radiated a positive outlook on life and always kept his sense of humor. He was quick to lend a helping hand to friend and family alike, and was loved and respected for his compassion and good sense. He considered himself lucky to have married Jo, lucky for years of health, and lucky for great family and friends.

The family suggests remembrances to be sent to Hospice Northwest or the COPD Foundation.
To order memorial trees in memory of Gerald Albert Roux, please visit our tree store.