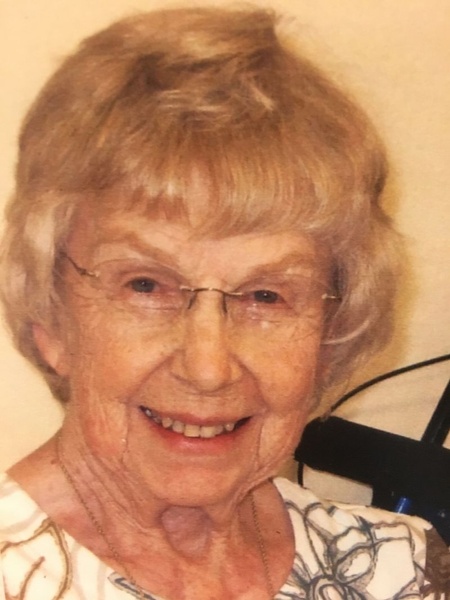 Gloria Lee (Haskins) Jordan was born in Butte, MT on October 19, 1930 to John (Bus) and Virginia Haskins and lived with them until June 8, 1952 when she married the love of her life, Ted (Shine) Jordan. Together they embarked on a grand adventure. They were joined along the way by 3 lucky sons and a lucky daughter who traveled with them to California, Montana, and Alaska, back to Montana, then to Ohio, Sweden, California, Idaho, Arizona- including a jaunt as high school chaperone to Switzerland, and then Utah. After the children were raised the two returned to Butte, eventually settling in Ted's boyhood home.
She lived a wonderful life full of travel and people and was a gracious and consummate hostess. She was beloved by all who knew her for her loving and gentle kindness and quickly made lifelong friends at every stop along the way.
Gloria finally met her beloved Savior face to face May 6, 2020 after a long and trying bout with age and infirmity.  She fought hard and was faithful to the end and was assuredly met with a smile, a crown and "Well done my good and faithful servant!"
She will be missed by all those who knew and loved her, but especially by her children John and Valerie Jordan, Ted and Kim Jordan, Robby Jordan and his lady ReNee, and Nancy and Rich Field. She leaves a rich legacy of hospitality and generosity to her grandchildren Jenny and Jason Goltz, Dawn Marie Jordan, Jessie Jordan, Britney Field and Dave, Andrea and Jeremiah Farris, Adrian Ettlinger, Derek Field, Carlene and Josh Beeman, and Elly Field as well as her great grandchildren Aaron Jordan, Jordan Goltz, O'shyn Jordan, Jackson Goltz, Eddie Statzer, Lottie Farris and Ollie Farris.
She was preceded in death by her beloved husband Ted Jordan, her precious grandson Shaynon M. Jordan and her parents John and Virginia Haskins as well as many aunts and uncles.
In lieu of flowers the family is asking for donations to be made to the Ted S. and Gloria Lee Jordan Endowment Fund at Montana Tech
https://foundation.mtech.edu/give/ or Christ Church Anglican https://www.cupofblessing.org/give/, both in Butte, Montana
A memorial service for Gloria will be planned for later this year, when socializing resumes.
To order memorial trees in memory of Gloria Lee Jordan, please visit our tree store.