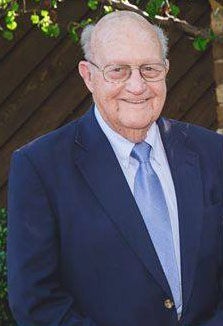 Jerry Mac Clay was born on May 17, 1931, in Winnsboro, Texas, to Winnie Laverne (Troxlar) Clay and Golden Clay. He passed away peacefully at home on November 12, 2021.

When Jerry was 10 years old, his family moved to Dallas, Texas, and in 1948 he graduated from Forest Avenue High School (now James Madison).

Jerry attended Draughon's Business College and afterward held several office jobs. He happily talked about his time working for the Coca Cola Company, where one of his best friends was Spanky McFarland of Our Gang. At the age of 27, after owning his own business for several years, getting married, and having two children, Jerry felt a personal conviction to go to college. In 1960, he graduated from the University of Corpus Christi (now Texas A&M University–Corpus Christi). When the family returned to Dallas, Jerry began teaching Distributive Education at Bryan Adams High School. Eventually, he became Department Chair of the Vocational Department and was a Senior Sponsor until his retirement in 1987.

Jerry was very proud of his service as a sergeant in the Texas Air National Guard. He enjoyed the men he served with and kept in touch with them for years.

On February 7, 1997, Jerry married the love of his life, Rosemary McKee. They spent the next twenty-four years traveling around the U.S., taking cruises, trout fishing with family on the White River in Arkansas, and living countless other adventures. They built a home in rural Rockwall County ("The Little House on the Prairie"), where they lived for ten years before moving into the city of Rockwall.

In 2004, Jerry and Rosemary began worshipping at Holy Trinity by the Lake Episcopal Church in Heath, Texas. Jerry was always the go-to person for any needed repairs. He also was an exceptionally gifted carpenter and could build anything out of wood. He constructed sets and props for the Holy Trinity Players as well as having roles in several productions. For more than 15 years, Jerry made Christmas-themed refrigerator magnets, giving them to both family and strangers. It saddened him deeply when his failing vision due to macular degeneration forced him to set aside his woodworking tools permanently.

The family sends special thanks to the Centric Home Health and Hospice staff, especially Tonya and Lauren.

In lieu of flowers, memorial donations to the North Texas Food Bank or to the charity of your choice will be deeply appreciated.
To order memorial trees in memory of Jerry Mac Clay, please visit our tree store.
Send a Sympathy Card