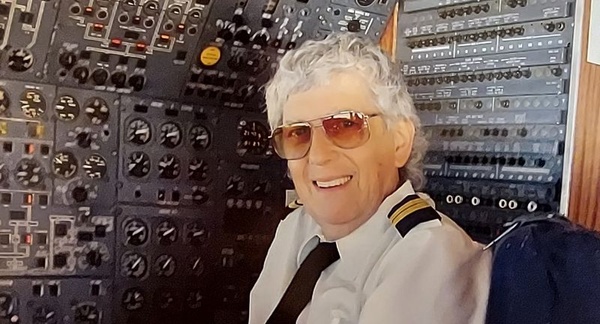 He Loved to Fly and it Showed!

John was born in Seattle to Morris and Helga (Hanson) Torvik. Schooling was at Webster Grade School, James Monroe Jr. High and Ballard High School (Class of '54), and finally the University of Washington.

From an early age, John loved flying. A favorite memory was of flying a toy plane around the room while his first grade teacher was out of the room. John majored in geography and cartography and enrolled iin the Air Force R.O.T.C., all the while pursuing aviation as a student pilot with his high school friend in a Piper Club. Two student pilots equals one pilot.

1960 was a landmark year, including graduation from the U of W, R.O.T.C. commission in the Air Force as a 2nd LT. and marriage to his soul mate, Cathy Dean McClintock.

The next 60 years saw a 21 year career in the Air Force; the first 13 years in photo lithography, mapping, photo interpreting and intelligence with tours at several U.S. bases plus overseas tours to Japan, Hawaii, The Philippines and Thailand in support of the Vietnam War. After the Air Force reduced officer ranks in 1973 at the end of the Vietnam war, Major John re-enlisted at McChord AFB, WA to complete the second portion of his AF career as a flight engineer on the Cf-141. A wonderful way to end end 21 years in the Air Force and retire in 1981 as a Major.

A 27 year career as a flight engineer in commercial aviation followed his Air Force retirement, first with Saudi Arabian Air Lines (4 years) and then American Trans Air (ATA, 23 years). John retired from commercial aviation in May 2008 when ATA declared bankruptcy. A sad day for John. John flew primarily on his favorite plane, Lockheed Tristar L-1011, logging over 19,000 hours with 700 hours on the Boeing 727-1. John's career took him to almost 100 countries. He loved the flying and always said he didn't go to work but went to fun.

John cherished the love and companionship of his wife, Cathy, reaching the 60th wedding anniversary he was looking forward to. The marriage was blessed with furry companions, all poodles and all precious: Poppy, Trinkette, Ginger, Cassidy (shelter to permanent home), and Cookie. All examples of God's unconditional love.

His faith was strong, always thanking God for the Guardian Angels watching over us.

Next to flying, John enjoyed hiking in the beautiful Pacific NW. He climbed Mt. Rainier with his brother, Kenneth in 1970. He volunteered with Mt. St. Helen's Institute as a volcano naturalist and climbed to the post-eruption summit with a group from Packwood Presbyterian. After moving to Shelton, WA in 2017, John hiked with Faith Walkers (Faith Lutheran Church) and his Senior Center hiking group.

In lieu of attending a service of any kind, John always suggested doing something you enjoy with someone you love and thank God for every moment of it.
To order memorial trees in memory of John Samuel Torvik, please visit our tree store.