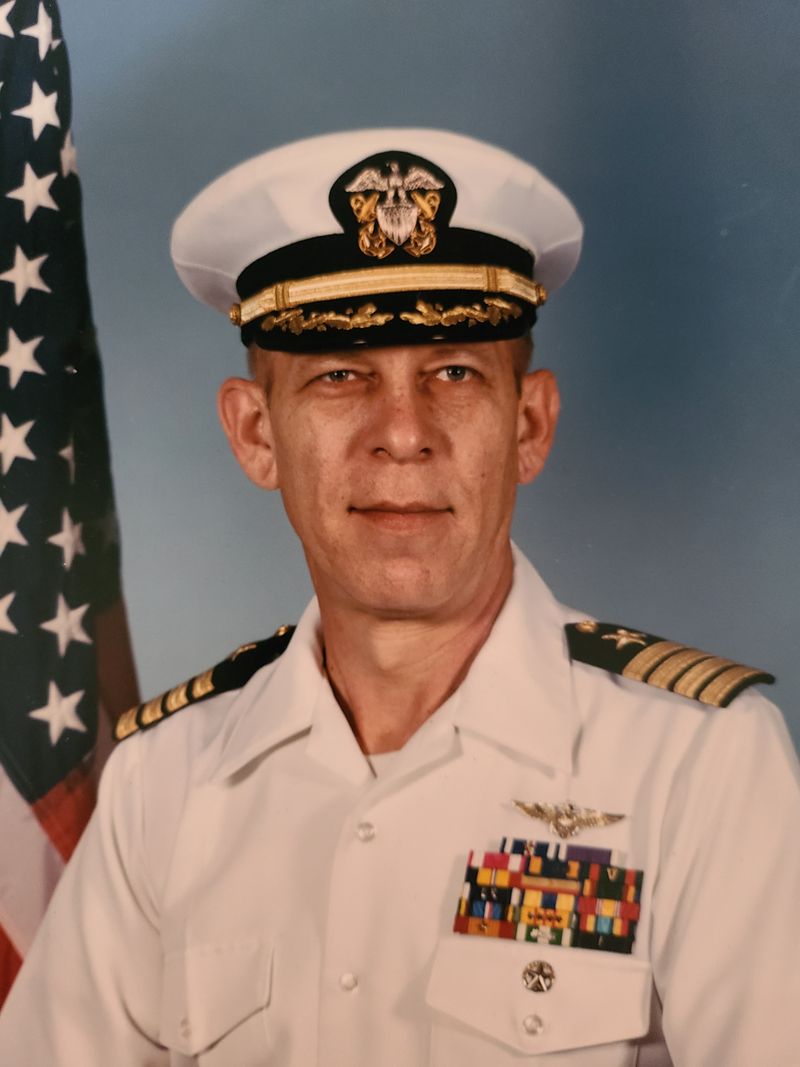 Captain Leonard Oscar Woltersdorf passed to his eternal reward 08 Feb 2021. Born in Laramie WY 10 Mar 1939, to Howard and Donna Woltersdorf, he grew up in Wyoming, Montana, and Southern California, learning to hunt and fish…and do the things most kids do. In 1959, Captain Woltersdorf began his journey to earn the coveted 'wings of gold' by becoming a NAVCAD. After a couple years in training, and honing his piloting skills, he earned those 'wings of gold' in 1961 at Ellyson Field in Pensacola FL.

Captain Woltersdorf began his aviation career with the 'Sea Griffins' of HS-9 based in Quonset Point RI, but stationed on USS Essex (CV-9), where he was front and center during the Cuban Missile Crisis. After that tour, he returned to the "Cradle of Naval Aviation" and the 'Eightballers' of HT-8 to teach up and coming student aviators how to fly. He earned a reputation for being VERY tough…but VERY fair. He cemented that reputation when he failed the Commanding Officer of the squadron when he came up for his annual Emergency Procedures check flight. Fortunately for ALL, the CO did MUCH better on the recheck. At the peak of his flying time at HT-8, he had the opportunity to train some of the first NASA astronauts. He had always considered himself one of the best pilots around....until he flew with the astronauts, and he learned a valuable lesson on the value of humility.

After several years in HT-8, Captain Woltersdorf was ordered to Vietnam, where he Joined the 'Sea Wolves' of HAL-3 as Operations Officer and Fire Team Leader. While there, he earned the ire of his enemies so much, that they put a bounty on his head. A bounty they tried…but were ultimately unable to collect.
After his tour in Vietnam, Captain Woltersdorf spent two years at the Naval Postgraduate School (NPG) in Monterey CA where he earned a BS in Engineering Science. After NPG, he began his "Aviation Appreciation Tour" as the Air Boss on USS Denver (LPD-9). He repeatedly stated that this was one of the most exasperating…and yet rewarding tours he ever had.

In 1973, Captain Woltersdorf transferred to 'Sea Devils' of HC-7 where he served in several different capacities, including Executive Officer as the squadron was disestablished. Captain Woltersdorf returned to academia for a year at the Naval War College in Newport RI, where he earned a Masters of International Relations, and a MBA from Salve Regina College. Upon graduation, Captain Woltersdorf returned to his aviation roots and became the Executive Officer and then Commanding Officer of the 'Indians' of HS-6 in San Diego. While he was at HS-6, the squadron won pretty much every award possible for them to win, including Battle E, Isabel trophy (for ASW Excellence) twice, and the Safety S.

After this highly successful tour, Captain Woltersdorf was ordered back to sea to become the Executive Officer on USS New Orleans (LPH-11). In 1983, Captain Woltersdorf was ordered to Navy Personnel Command in Washington DC, where he was in charge of enlisted separations. He felt he did more good for the Navy at that job than any previous billet, as he was separating people who were not making the Navy a more effective fighting force.

After this first tour to DC, Captain Woltersdorf was ordered to Greece to become the Commanding Officer of Naval Station Souda Bay, on the Island of Crete. He said that this tour was probably the most fun, since it gave an opportunity to travel and learn a new and decidedly different culture. After his tour in Souda Bay, Captain Woltersdorf returned to DC and this time he worked in the Pentagon as the "Duty Captain", while simultaneously earning a Teaching Certificate from George Washington Univ.

He retired from Active Duty in 1992 and moved to Spokane WA. While in Spokane, Captain Woltersdorf re-entered the gates of academia, but this time as a high school math and science teacher. His tough but fair approach gained quite a few admirers….though that was usually AFTER they graduated and realized that he was preparing them for life beyond school.

Captain Woltersdorf was an elder at Northview Bible Church. He was also heavily involved with the Gideons International, helping ensure Bibles were distributed all over the world to places that were in dire need of receiving the Word. He was also a member of El Katif Shrine, North Hill Masonic order and Valley San Diego Scottish Rite. When he wasn't saving the world from the enemies of democracy, he LOVED to travel, especially if trout fishing was involved…and he played a wicked game of bridge.

Captain Woltersdorf is survived by his wife of 60 years the former Ruth Ann Barnicoat of Butte MT, his two sons, Kurt (with wife Mary), and Keith (with wife Mitzi), three younger, and decidedly lovelier sisters, Janna, Leigh, and Karen, three granddaughters, two great grandsons and one great granddaughter, and numerous nieces and nephews.

In lieu of flowers, donations may be made in his honor to either Gideons International or the Shriner's Hospital for Children.
To order memorial trees in memory of Leonard Oscar Woltersdorf, please visit our tree store.
Send a Sympathy Card