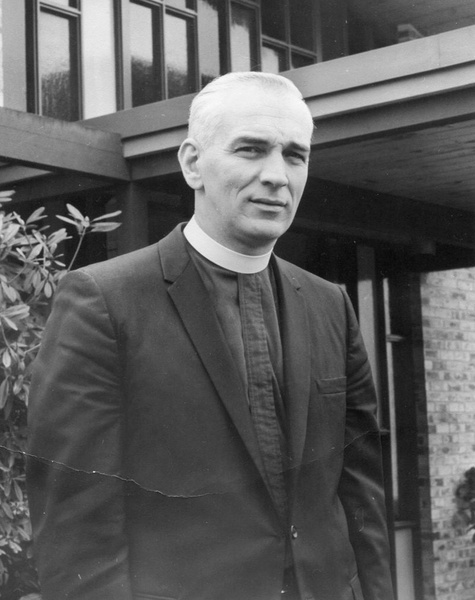 Lester Gilbert Olson
February 15, 1929 – May 8, 2019
The Reverend Lester Olson left us today to join his Father that he served so faithfully for nearly a century. Pastor, father, brother, friend and husband, Les was a giant of a man who moved through his life gently and humbly; loving wherever he could, and forgiving everything else.
Les was born in Duluth Minnesota, the fifth of nine children, to Carl and Elin Olson, both immigrants from Sweden. His father Carl also was a Lutheran minister (as was his grandfather), who barely made enough to feed this large family. Les never forgot what it was like to feel small, hungry, and frightened. And it was this backdrop that prepared him for the role he that was to fill for the rest of his life: Pastor Olson.
With his big heart and his big hugs, he drew people to him everywhere he went, never letting anyone slip through the cracks. Even when his own challenges seemed too great for him to handle, Les greeted every soul with a big smile and bucket of hope. He was everyone's pastor: life stories were shared with him in grocery lines; broken people anywhere suddenly found themselves laughing; seat mates became lifelong friends; and one, very special New England girl was completely taken in.
Les met Margaret Lenia Johnson at Augustana College, where he attended seminary. Peggy knew that Lester was the man for her at first sight, and Les could not have agreed more; and so started a nearly 70 year romance between two of the most wonderful souls that ever found one another. They were married in 1954. Beginning then, they served together for 40 years in parishes in: southern Oregon (Faith Lutheran), Federal Way (Calvary), Vancouver (St. Paul's), Olympia (Gloria Dei), and finally in Bonney Lake at Creator Lutheran Church.
Lester and Peggy really did serve churches together. They came up in the old tradition that anticipated getting one wife for free per each minister that was hired. So, he ran services, she directed the choir; he taught adult class, she taught Sunday school; he fed the masses communion, she fed the needy. Both served with simple faith and genuine caring; both were adored wherever they found themselves. Lester was completed by Peggy; their togetherness was their joy.
Les is survived by his wife Peggy, and his children Glenn, Janis, Dale and Kathy, but only for a spell. Les had one thing he wanted tell us all: Be not afraid for God is real and life is eternal.
To order memorial trees in memory of Lester Gilbert Olson, please visit our tree store.
Send a Sympathy Card