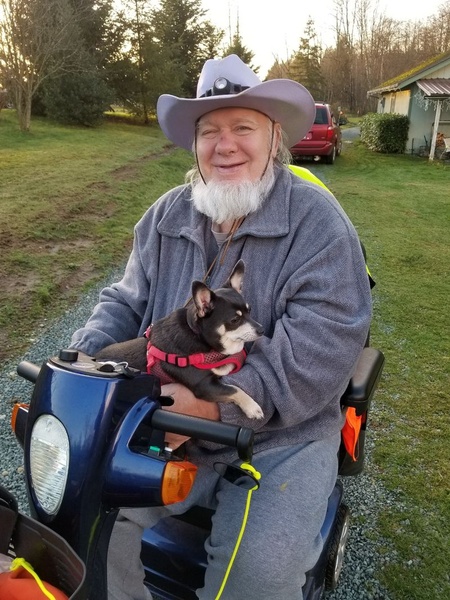 Mr. Lin L. Holdeman (74) (nick name "Poncho") passed away quietly at his house in Sedro-Woolley, Washington, on Feb. 20th, 2021. Born in Lexington, Nebraska, May 29, 1946, to Frank and Freida (Busch) Holdeman. He has three sisters, Darlene, Maxene, and Louis. He was married twice in this life. First marriage to Donna Holdeman (Anderson), who passed away in 1989. Second wife, Roseann Holdeman (Mayer), who passed in 2015. He was sealed to his wives, through the Church of Jesus Christ of Later Day Saints. His only son, Lin L. Holdeman II, still resides in Sedro-Woolley, WA.

He served in the U.S. Marine Corps as a Crew-Chief on C-130 aircraft, during the Viet-Nam war. He switched to the U.S. Army in 1969, after marrying Donna, and having his son. There he served the remainder of his career on M-60 Combat Tanks. His service took him, his wife, and son, all over the world. Fort Bliss, and Fort Hood, Texas, Camp Casey, South Korea, '74-'75. Fort Knox, Kentucky, Fort Carson, Colorado, and 2 tours in West Germany, Ferris Barracks (Erlangen) 1977-1979, and Stork Barracks, Illesheim, 1981-1984. He received a full retirement, Honorably Discharged. He lived in Junction City, Oregon after separating from the Army.
He survived his first wife, Donna, and remarried to Roseann. He became a Certified Nurse's Assistant, and Roseann became a Licensed Practical Nurse. They both cared for the elderly, in nursing and private homes in Snohomish, WA, as well as Cle-Elum, WA. They enjoyed traveling around on their Honda Goldwing motorcycle. He moved to Sedro-Woolley, from Cle-Elum, to live with his son and his family; Shelly, Brandon, and Shawn, after the passing of Roseann in 2014. He became strongly attached to his lap dog, Nellie, a Chihuahua. He had daily visitors from Home-Instead, and best friend John Anderson, his neighbor. In fact all the neighbors new him from his warm greetings on his scooter and his trusty side kick Nellie. He was warmly looked after until the end.

As per his wishes, he will be interned with Roseann, at the National Cemetery, in Tahoma, WA. Date to be arranged.
To order memorial trees in memory of Lin Leon Holdeman, please visit our tree store.