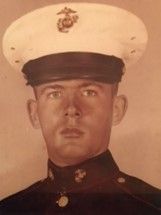 Lloyd Dustin (Dusty) Amrine passed away on Wednesday, December 23, 2020 at Christus Mother Frances hospital Tyler, Texas with his loving wife, Sandi by his side.
Dusty was born May 9, 1942 in Bisbee, Arizona to Lloyd Anderson Rand and Sarah Ella (Naegle). His family moved to California when he was young and after high school served in the Marine Corps from 1960-1964. Upon completion of his military service, Dusty worked as a Lineman installing cable towers and in the oil fields across the Northwest United States. He later settled in Polson, Montana to pursue his passion as a car salesman earning several sales awards and promotions before opening his own car dealership. In his off time, Dusty was an avid cross-country motorcycle rider preferring his Honda Goldwing over those "Harleys". On one of his cycling adventures he met and married his loving wife, Sandi. Upon retirement, Dusty and Sandi settled in Tyler, Texas to pursue a new adventure together.
Dusty was a fighter. He battled pain and health issues for several years remaining positive and determined to get stronger after each set back. Dusty was preceded in death by his parents and brother, Charles. He is survived by his wife Sandi, sister Sarah, sons Michael (Lita), David (Maria), and Daniel, daughters Annette, Lisa (Ron) and Traci, 14 grandkids, 17 great-grandchildren and numerous nieces, nephews and other relatives.
To order memorial trees in memory of Lloyd Dustin Amrine, please visit our tree store.
Send a Sympathy Card