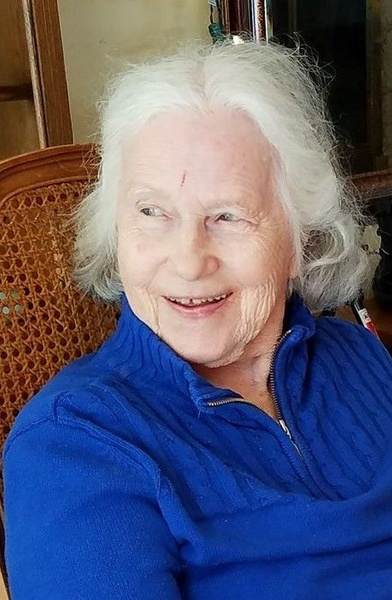 Marcia G. Smith, the only child of Fred and Clara Hoag died peacefully at her home in South Cle Elum, Washington February 23, 2021. She was born and raised in Hoquiam Washington, where she met the love of her life, Dan Smith while in High School. Following graduation from Hoquiam High School in 1939, she attended Central Washington College of Education for almost 3 years, studying elementary education.

In 1942 the advent of World War II interrupted Marcia's college plans. Dan and Marcia married in Yakima in 1942 departing for Columbia, South Carolina where Dan was stationed with the Army Air Corps. During their stay, son James arrived. Later, when Dan was stationed in the South Pacific, Marcia moved to be near her parents in Hoquiam, where second son Daniel Jr. was born. Following the war, Dan & Marcia returned to Seattle where she worked hard to care for her family as Dan was busy working full time as well as finishing his college education. Daughter Nancy arrived just before Dan got his diploma at the University of Washington. About 1951 Marcia and Dan moved to Hoquiam, staying 2 years while she cared for her terminally ill mother. Marcia was a busy mother and homemaker as well as working alongside her husband and father at the Thomas Flower Shop in Hoquiam. Following the loss of her mother, the family returned to the Seattle area. Son Joe arrived in 1957.

In addition to her homemaker responsibilities, she worked several part-time jobs at various times as a school cook, nurse's aide, seamstress, day care provider, and Polk census taker to supplement the family income. Marcia was an active member of the Blvd Park Presbyterian Church. She was a Cub Scout Den mother, and a volunteer "Gray Lady" through the Red Cross, spending time with disabled children at the Rainier School in Buckley.

About 1968 Marcia and Dan were one of the first to purchase a home in the new Fairwood Greens development in Renton. When Dan's job change mandated a move to the east coast about 1972, they lived in Boothwyn, Pennsylvania and Norfolk, Virginia. Returning to Renton in 1975, they purchased another home in Fairwood Greens where they resided 32 years. Her grandkids recall the porch swing that provided much enjoyment while visiting their home.

She and Dan enjoyed daily and lengthy walks in their later years, as well as square dancing and Masonic Lodge activities where Marcia rose to the level of worthy matron at the Kent Order of the Eastern Star. Traveling to Hawaii for their anniversary was a yearly pleasure. Marcia and Dan, saw Europe, China, and Russia as well.

She loved children, sewing, growing flowers and vegetables, never missing a year to pot a tomato plant to watch over. Her skill with the crochet hook kept her fingers busy until very recently, making scarves and hats for family and charity. She was a talented water color artist who never seemed to have the time required to devote to this pursuit. She loved bargain hunting and could pinch a penny very well.

Marcia was diagnosed with Lymphoma when she was 82 years old but with chemotherapy went into remission. After selling their Fairwood home in 2007 Dan and Marcia lived in supportive care facilities near their daughter, Nancy in eastern Washington. In 2020 Marcia at the age of 99 learned cancer had returned. She tried hard to hold onto life to celebrate her 100th birthday, but was called just a bit earlier to be with loved ones who had gone before.

In in addition to her son, James and his wife, Joyce, and her husband Daniel, Marcia was predeceased by her parents, many aunts and uncles, and cousins to include Frank Hoag Jr. (killed at Pearl Harbor 1941), Phyllis Mills 1966 (who was like a sister), Stanley Phillips, and William Meyer.

Marcia was a very optimistic person, always having a smile for everyone she met. The family will miss her gentle nature, kind words, and most of all her motherly love and guidance, which set the pattern for raising her children's families.

Arrangements for a private family memorial/100th birthday party for the immediate family will take place in March. In light of the pandemic there will be no public service. Interment will take place at a future date at the Tahoma National Cemetery in Kent, Washington.

The family wishes to gratefully thank the Management and staff of Belair House in Cle Elum and Malibu House of South Cle Elum, for outstanding love and care. They truly made it a home for Mom.
To order memorial trees in memory of Marcia Georgia Smith, please visit our tree store.