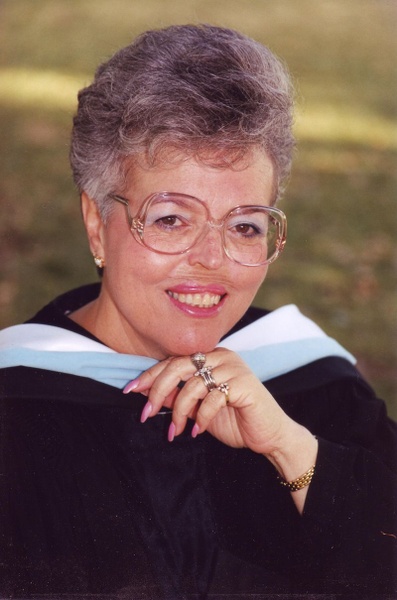 The life of Dr. Maria Klein is an example of what can happen when the doors of life are swung wide open by the fresh breeze of history. Maria died at age 84 on August 1, 2020, at the end of a life fully lived. Born in New Orleans in 1935, her parents Gypsy and Villere moved to the Golden State for opportunities not available to a Creole family in Louisiana. Maria was a toddler then, and Los Angeles was full of orchards and fields and possibilities. The shipyards and the movie industry provided ample opportunities for her family. As a schoolgirl she made amazing friends who went on to high school together at Saint Mary's Academy. The Sisters there not only taught them, but cultivated them to be powerful, smart and forward-thinking women.

One of her friends, Arlene, introduced Maria to Richard at a dance. This handsome boy dated the cheerleader through high school and later married her while he served in the Coast Guard. Dick and Maria celebrated 64 years of marriage this past May. Maria prayed to Saint Jude to be a mama, and that prayer was answered when Martin Jude was born in 1958. Saint Jude was generous. He answered another four times with Mariterese, Mitchell, Monica and then Marcella, born in 1965.

This family of five babies in seven years settled in Simi Valley when the streets were lined with eucalyptus and milk was still delivered. In 1968, Moorpark College had been open for just one year when 33 year-old Maria enrolled to follow in her grandmother's footsteps to become a teacher. Maria started college when her youngest was three and was a credentialed teacher in seven short years.

By the time she graduated from Cal State Northridge, her youngest was 10 and her oldest 17 and graduating from high school. In the 1960s and 70s, she was not just witnessing the civil rights movement and the women's movement--she was living them. Maria laid a path later followed by her daughter and three grandchildren who also became teachers.

Maria absolutely loved teaching. She started her teaching career at Saint Rose of Lima and completed it at Chaminade College Preparatory. She also taught seminarians at Saint John's Seminary for several decades. Along the way she earned her doctorate from the University of San Diego.

At home, there was music playing, dancing in the kitchen, friends around the dinner table, and the boisterousness of well-loved children at work and play. Maria was quick to smile, easy to laugh, and game to give anything a try. There were square dance practices in the garage and Saint Rose of Lima's earliest CCD classes were taught there too. It was common for priests to join the family for Sunday afternoons and family dinners.

An adventurous spirit, Maria traveled the globe after retiring from teaching. She loved watching travel shows and reminiscing about the beauty and culture she experienced in her travels. She enjoyed social events with her fellow members of The Red Hat Society. The colorfulness of her outfits reflected the colorfulness of her personality and her ties to New Orleans. She loved to decorate a campsite at Morro Bay for Thanksgiving and to decorate her home for Christmas where gumbo was a holiday tradition. She was at her best at the beach, walking at the shore, admiring shells and taking in the sun.

A virtual service to celebrate Maria Klein's life and mourn our loss is planned for Sunday, August 9, 2020 at 11:00AM. (Details are on this site.) Three funds have been established to honor Dr. Maria T. Klein's life if you would like to donate in her memory.
To order memorial trees in memory of Maria T. Klein, please visit our tree store.
Send a Sympathy Card