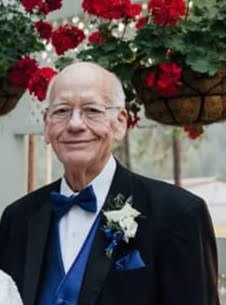 Paul E. Hagen, Jr. died on July 23, 2020 in Spokane, Washington due to complications of kidney disease. Paul was born to Paul and Edith (Munn) Hagen in Sturgis, Michigan, on June 15, 1946. Paul graduated from White Pigeon High School in 1964 and from Trine University (formerly Tri-State University) in Angola, Indiana in 1968 with a degree in electrical engineering. He spent the majority of his adult life in the Baltimore, Maryland area where Westinghouse, now Northrop Grumman, employed him for 49 years. He retired in October 2017.

In December 2017 he moved to Spokane, WA to marry a teenage sweetheart Linda (Palmquist) Wiser. He was welcomed with love into the Wiser family of 10. They were married on August 4, 2018. Their time together was filled with travel, grandchildren activities, church events, and leisure time at our summer place on the Pend Oreille River.

He is survived by his wife Linda of Spokane, his son Rob (Amanda) Hagen of Silly, Belgium, his daughter Meredith Hagen of San Antonio, Texas, his grandchildren Alex Hagen and Emma (Michael) Muccioli of Baltimore, his sister Kathryn (Brian) Daly of Windsor, CT and his brothers Jeff (Vonda) Hagen of Hudson, Indiana and Dale (Robin) Hagen of White Pigeon, several nieces and nephews, and his extended Hagen and Munn families. Also survived by Linda's children Heather, Chad (Dory) and Ryan (Melanie) and grandchildren Kolbe, Jonah, Quinn, and Analee. He was preceded in death by his parents, a sister, Mary Jane, and his wife Mary (Cathy) Hagen.
To order memorial trees in memory of Paul Edward Hagen, please visit our tree store.