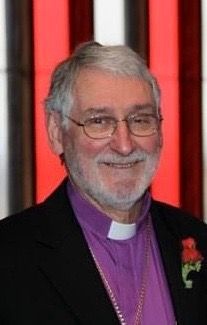 He is survived by his children, Jeffrey (Mary), Paul, Kathryn, Patrick (Mary), Monica (Eli), Mathew, Michael (Kim), and Jennifer, 13 grandchildren, 9 great-grandchildren, 8 nieces and nephews, a father figure to many in a large beloved extended family. He was predeceased by his sister Eileen (Ed Stich), brother William (Sharon), wife Cathie, and his former wife Patty.

Born in Seattle, WA on November 29, 1928 to James and Marian (Funk) Boyce. He attended St. Benedict'sGrade School, O'Dea High School (1954), and Seattle University. He was an Engineer for AT&T. After retirement, a man of strong faith, he returned to school to study theology. He was ordained in 1984, and consecrated Bishop in the Reformed Episcopal Church. He planted and served at St. Paul's Anglican Church, was a founding member of the Anglican Church of North America, Bishop of the Diocese of the West (REC), he retired as the Vicar General of the Diocese of Cascadia.

Services will be held at a later date. The family wishes to express their deep appreciation for the loving care he received from David and Dora at Marianna's Adult Family Home. He was a good man.
To order memorial trees in memory of Richard John Boyce, please visit our tree store.