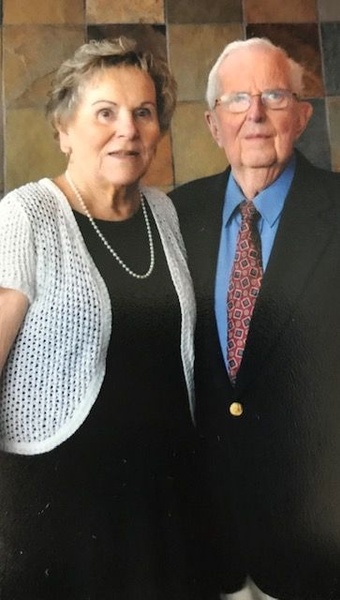 Richard grew up on the family dairy farm in Willapa, Washington. Donna grew up in Raymond and graduated from Raymond High School in 1952. Dick spent 2 years in the Army in Fort Hood, Texas. Before leaving for the Army, he met the love of his life on his milk route – Donna Hardinger. They were married on January 12, 1952. After discharge, they returned to Raymond where Dick continued to work on the dairy farm and he and Donna raised their 4 children. In 1967 the family moved to Aberdeen where Dick worked with the Sunbeam Bread Company. While in Aberdeen, Donna worked for the Aberdeen School District. Richard joined The Equitable Life Assurance Society in 1969. In 1971, he was appointed district manager for Equitable and they moved to Olympia, where he and Donna remained for the rest of their lives. Dick retired from Equitable in 1991. After moving to Olympia, Donna started working for the Olympia School district. She retired in 1998 as a secretary at Capital High School.

Donna received her AA degree from Centralia College in 1984. She had a variety of interests through various stages of life. She enjoyed sewing and made numerous outfits for the kids. Canning fruits and vegetables was a yearly event. She loved making homemade jams which she shared with the extended family. She later enjoyed cross country skiing and even roller blading. Donna had a flair for always being stylish. She treasured the times she met with her dear friends from high school. After retiring, she also looked forward to meeting with her "coffee ladies".

Richard developed a lifelong habit of rising early and working hard. He enjoyed working outside, was known for his green thumb and took special pride in his Dahlia garden. Together, they enjoyed making their yard look like a showcase. A variety of birds and squirrels frequently visited the well-stocked feeders in their yard. Dick also loved making his family favorite recipes of delicious carrot cake or potato salad to share. Playing cribbage was a lifelong source of enjoyment. They looked forward to spirited games with family and friends.

They were Elks members since their days in Raymond, where they enjoyed fellowship and dancing.

Dick and Donna had an adventurous spirit and enjoyed traveling. They went to Europe, Mexico and even Alaska on the deck of a ferry. One of their favorite places was the big island of Hawaii to visit their son Greg. Dick loved going out on the boat fishing and shooting the breeze with the locals. He definitely had a gift to start conversations with anyone.

Richard and Donna had servant's hearts. Richard was always ready to lend a helping hand. He volunteered at the Lion's Eyeglass Recycling Center for years. Donna was a member of Altrusa International. Each year during Lakefair, you could find Dick and Donna volunteering at the Altrusa Lakefair booth, making and selling thousands of elephant ears. They were long time members of St Michael Parish where they volunteered in several ministries over the years. Together they spent many hours at the St. Vincent DePaul clothing bank.

The couple enjoyed watching sports on TV in their later years. Above all, they loved watching the Mariners and the Gonzaga basketball team.

Dick and Donna's greatest pleasure in life was family. They loved their grandkids and great grandkids. You could see the joy and love in their eyes whenever they were with them. One of Dick's numerous hobbies was creating wooden trucks, rocking horses and doll beds for the grandkids, many of which are still being used today by their great grandkids.

Those wishing, may share condolences and memories at dignitymemorial.com.
To order memorial trees in memory of Richard Louis Monohon, please visit our tree store.