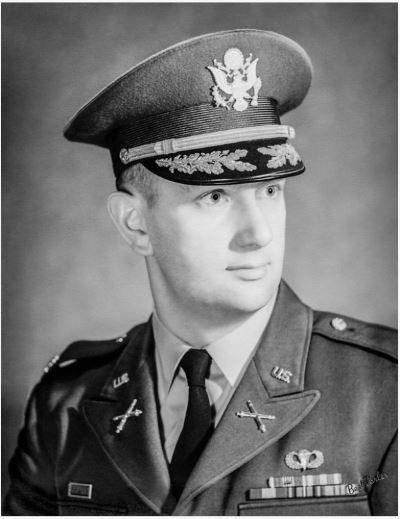 Robert (Bob) grew up in Mountain Lakes, N.J. and is preceded in death by his father Danforth King Gannett, mother Montie Julia (Booker), and older brother Elwood King Gannett. He excelled at the Pennsylvania Military College where, after graduating in 1960, he went on to 15 years of selfless service in the U.S. Army. He achieved the rank of Major and received numerous awards to include: Vietnam Service Medal with one bronze service star, Republic of Vietnam Campaign Medal, National Defense Service Medal, Army Commendation Medal with one oak leaf cluster, Armed Forces Expeditionary Medal (Korea), Ranger Tab, and Parachutist Badge.

While in the Army, he met the love of his life, Andra Dekshenieks of Tacoma, Wash., and they married on September 12, 1970. During their 50 years together, they had countless laughs, celebrations, joys, and adventures to include the raising of their four children in Texas (Alexandra Gannett, Christina Gannett, Patricia Borchardt, and Richard Gannett), adding Jeremy Borchardt and Elena Gannett to the family, watching their six grandchildren grow (Bailey Kunkle, Payton Kunkle, Mackenzie Kunkle, Quentin Borchardt, Riley Borchardt, and Silas Borchardt), and enjoying with love the family canines and felines—all treated with equal measure as family members. Bob and Andra eventually relocated from Texas back to Tacoma, Wash., where they continued their life together, walking along the water and looking out at "their mountain" from their front porch.

Bob loved the Army; had a passion for guns, shooting, flying planes, John Wayne, and Texas; and enjoyed classical music, a well-made Manhattan, a cold beer in the afternoon, a good meal, and the occasional cigar, especially with his son. He often said he preferred the company of dogs to people and had many beloved pups in his lifetime. He claimed to not like cats, but they always had an incredible fondness for him; he could often be found with one curled up in his lap or on his chest.

Bob had a very strong faith in God; a great honor and respect for his country and for all, past and present, who served under her Flag; and a strong kinship, admiration, and respect towards law enforcement. His beloved wife, Andra, was his world. He loved his children and extended family and is remembered with warmth, humor, and love.

Rest in peace, Bob. Fly your planes again; say Hi to all the animals you have loved along the way; enjoy that happy hour in the sky with your Dad, Mom, and Brother; and know that we've got this from here.

Until we see you again.

Bob will be interred at Tahoma National Cemetery with full military honors. In lieu of flowers, the family requests a gift dedication be made in Bob's name to Dog Is My CoPilot, PO Box 3399, Jackson, WY 83001, dogcopilot.org.
To order memorial trees in memory of Robert Webb Gannett, please visit our tree store.
Send a Sympathy Card