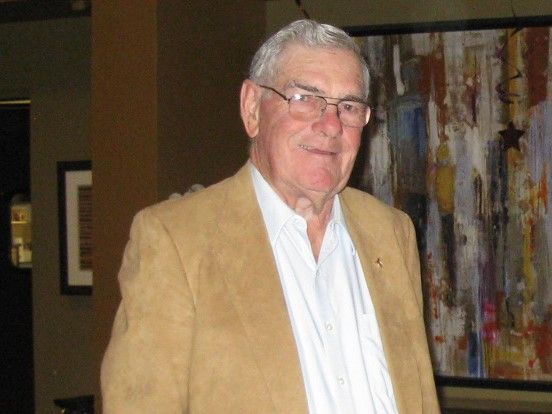 Robert "Bob" A. Hood, 87, passed away on June 19, 2021, in Olympia Washington. Born in Sabattus, Maine in 1932, the son of Beatrice (Austin) and William Hood, he was a "Mainer" throughout most of his life maintaining a residence in Lewiston and then in Harpswell. He enjoyed extensive traveling and "snow-birding" in Palm Desert, California and recently Olympia, Washington near his daughter Brenda and son-in-law Brad who were with him as he peacefully transitioned.

Bob grew up and was educated in Lewiston, then served his country honorably in the U.S. Army stationed in Germany, during which he was invited to play on the Army baseball team. He graduated from Bentley College with a degree in accounting. He briefly moved to Pasadena, California where he met his wife, Marion, through mutual friends, and they enjoyed dance competitions, live music and the beach. Together they raised a family in Lewiston, enjoying summers on Lake Cochnewagon in Monmouth, then in Harpswell. Bob was very active in the community and worked in, then later led, the family business, Hood's Mailing and Printing, Inc.

Bob was an avid golfer, playing many courses around the country into his early 80's and hitting a hole-in-one at the age of 72. He was a model train hobbyist and was very active in the Train Collectors Association. Until a back injury side-lined him, he loved snowmobiling and was in several bowling leagues, winning many trophies and inducted into the regional bowling hall of fame in 1975-76. In addition to playing basketball and baseball, he coached locally and became a "favorite fan" of the LHS and Bates College teams, even invited to travel on the Bates basketball bus to away games. He enjoyed boating, fishing, horseshoes, dancing to live music, "Sunday drives in the station wagon with a picnic," and was never without a camera or video recorder.

In addition to the many local business and civic organizations he belonged to, he was active in the Elks and in Freemasonry, having been a member of Ashlar Lodge no. 105 in Auburn, of the Scottish Rite Valley of Portland, of Put Stevens Court, R.O.J., serving as its director in 1995, and of Kora Temple, A.A.O.N.M.S., serving as the first director of the Clown unit, and raising funds and volunteering at the Shriners Hospital for Children in Boston.

Survivors include his daughter Brenda Hood (Brad Judson) of Olympia Washington, his son, Robert (Rob) Hood, Jr., of Portland Oregon, several cousins, nieces and nephews, his son-in-law Jim Francis, and many dear friends. He was predeceased by his wife Marion, his parents, his in-laws Alice and Edmund Fiedler, his daughter Karen Hood-Francis, his daughter Nancy, his brother Bill and sister-in-law Jeanne.

Memorial donations in Bob's memory may be made to Shriners Hospitals for Children: See donations link to left, or call 844-739-0849, or mail to PO Box 863765, Orlando, FL 32886 or online at www.lovetotherescue.org.
To order memorial trees in memory of Robert Austin Hood, please visit our tree store.
Send a Sympathy Card