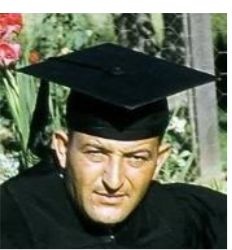 Rosario Ricardo (Ric) Forestiere was born on February 3, 1928 on the second floor above his family's grocery store, the Sicilian Grocer, in downtown Fresno. He grew up on his family's ranch at Shaw and Hayes and attended Central High School until his father decided to send him to the Redemptorist Order of the Catholic Church to become a priest. After three years in seminary, he began as a novitiate in St. Joseph's Missouri only to change his mind three months later and not become a priest. Ric's faith in the Holy Spirit and the Catholic Church stayed with him through his entire life.

He joined the United States Navy and rose to the rank of Quartermaster 2nd class serving on two ships in the Korean conflict... the USS Mattaponi and the USS General Mann.

While in the Navy he married Lorraine Ruth Faulks. Together they raised six children and were married for 49 years until she passed away in 2012. He was honorably discharged from the US Navy and returned to Fresno, California. He attended Fresno State earning both a Bachelor's and Master's Degree in Education. Once he graduated from Fresno State, he started teaching for Fresno Unified School District and for 38 years taught Special Education and Home Instruction.

A special person in his life was his uncle Baldassare, who was also his godfather. One of Ric's favorite stories to tell about was when he and his cousin accompanied Baldassare to his ranch in Coalinga. The ranch was at the base of the mountain and often wept water that Baldassare collected into a small pond he built out of stone. When they got to the ranch, Baldassare would leave a bottle of beer in the cold water so that by lunchtime the beer would be chilled. After helping in the orchard, Ric and his cousin would drink half the bottle, fill it back up with the spring water, firmly press the cap on, and leave it exactly the way they found it. When Baldassare opened the bottle over lunch, he would curse the brewer for selling cheap beer. Ric was never sure if his uncle figured out why the beer was watered down. Nevertheless, he always looked forward to their next trip to the Coalinga ranch.

Following Baldassare's passing in 1946, Ric's father Giuseppe became the second-generation caretaker of the Forestiere Underground Gardens. Giuseppe spent the next 25 years preserving the Gardens before Ric and Lorraine became the third-generation caretakers and spent 40 years sharing and protecting their family's legacy. The Ric Forestiere family was responsible for the Gardens applying and receiving the designation of California State Registered Landmark, the National Register of Historic Places, and eventually a Fresno City and County Historic Landmark. It was through Ric and Lorraine's efforts and the efforts of their children, their children's spouses, their grandchildren, and great-grandchildren that the Gardens exist today. Ric and Lorraine's descendants represent the fourth, fifth, and sixth generation caretakers of the Gardens and are committed through their love and dedication to the continued protection and preservation the Gardens.

As with life, Ric's passing is but another step in his journey to Christ. All who knew Ric understood that his faith in the Catholic Church and in Jesus Christ was without question. We can rest assured that Ric is having a theological debate with St. Peter on the merits of entering the kingdom of heaven quoting scripture, St. Augustine, St. Paul, and others.

Ric passed away at the age of 92… 93 if you use his math and count his time in the womb.

Donations may be made to: Sisters of the Divine Master, 3700 N Cornelia Ave, Fresno, CA 93722.
To order memorial trees in memory of Rosario Ricardo Forestiere, please visit our tree store.
Send a Sympathy Card