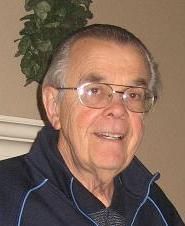 Roy left this earth on April 19, 2020 to be with his Lord at the age of 88. He was born July 13, 1931 to Albert and Rosa Wilhelm, in Oak Park, Illinois, a suburb of Chicago. His parents had emigrated from Germany in the 1920's. His father was a meat cutter at the Swift Meat Packing Company in Chicago.
Roy's father died when Roy was only five years old. Besides his mother, he had a sister, Helen, who was two years younger and a brother, Albert, five years younger.
Roy used to take his wagon to help older people get groceries. They paid him a nickel, which he had to place on the kitchen table to help the family. Eventually, his mother bought him a bike so he could deliver newspapers. At thirteen, he was hired as a soda jerk at a Walgreens and was paid 50 cents an hour; all his funds went to support his family.
His mother was always worried about money and chose Roy's career. She wanted him to be a tool and die maker like his Uncle in order to get a good paying job during the Great Depression and WWII. After Roy graduated from high school, he worked in a machine shop. His sister and brother also worked to support the family.
Roy was a Marine in the Korean War. He was a noncombatant and worked as a jet aircraft electrician for the First Marine Air Wing in North Carolina. He repaired Grumman F9F5 Panther jet fighter bombers. After the war, he went on to college and obtained a Master's degree in Theology. Ever since he had become a Christian in Christian Service Brigade as a youth in his church, he had wanted to be a minister.
Roy married Karen Schilf in 1956 and they left the Chicago area and moved to California where he served his Lord Jesus in a variety of jobs: one year as a chaplain intern in a state mental hospital, four years as a chaplain in the huge L.A. General Hospital and four years as pastor of a Baptist church in Los Angeles. His final job was as a chaplain in a young adult state prison in Camarillo California, for 23 wonderful years.
Roy and Karen raised 3 daughters. When Roy retired in 1994; he and Karen traveled many miles all over the USA in an RV. They moved to Pahrump, Nevada and eventually moved back to Ventura, California, where Karen died in 1999. Roy married Patricia Greenslit in 2001and they continued to travel and have many adventures of their own. Roy became very joyful in the second half of his life. He felt very loved by God and his ambition was to influence people to excel in their skills and serve the Lord Jesus.
Roy is survived by his wife, Patricia, his sister Helen and his brother Albert. He is also survived by his daughters, Kristie Warner (Harry), Kim Zandona (Angelo) and Kandy Gedies (Ralph); his 4 grandchildren, Shauna Rodman, Jared Warner, Rhett Gedies and Kassandra Gedies; and his 3 great-grandchildren, Nico and Theo Warner and Kayleigh Rodman.
A celebration of life service will be held for Roy sometime this summer, hopefully in July. In lieu of flowers, donations can be made to the Ventura Missionary
To order memorial trees in memory of Roy Alfred Wilhelm, please visit our tree store.
Send a Sympathy Card