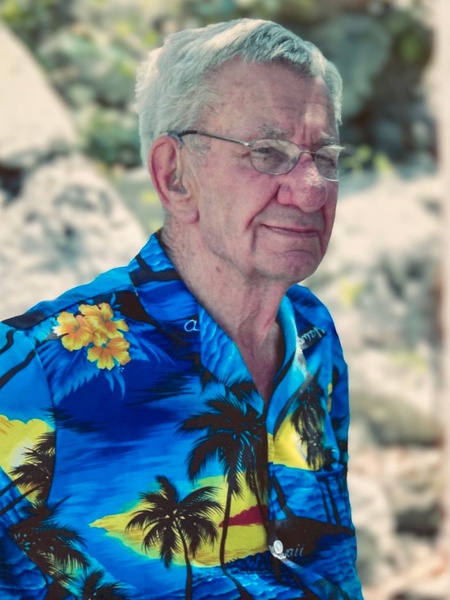 Samuel Laird Philip's ninety-four years were about quietly and craftily creating experiences for people. He was impressed by people. Sam ended his time with us on October 20th, 2020 at his apartment in King City, Oregon.

Sam was born on June 22, 1926 in Tigard, Oregon to Ruby and Samuel L. Philip, Sr. He grew up in Tigard with his sisters Hazel, Sherry and Midge. After High School, he joined the US Air Force, serving during the last year of World War II. He was again called into service for the Korean war, serving as Military Police on Guam.

Early in life, he worked as a mechanic, sawmill operator and other endeavors. Sam and Dolores began creating experiences for people in the community first by purchasing the Del Mar Club on Barbur Boulevard in Portland. Running a nightclub isn't easy. Between fires, and road widening projects, the club lasted only a few years, before they opened the El Gato Tavern in Milwaukie, Oregon. While Dolores ran the tavern, Sam began a long career behind the scenes of events that would bring smiles to hundreds of thousands of people. Working for Cady Decorating, he was instrumental in building some of the most fabulous floats for the Portland Rose Festival Parade in the 1960's. By 1972, he began working for the Multnomah County Fair and Expo Center. By the late 1970's, he was Managing the Expo Center and the Multnomah County Fair and continuing to improve an urban county fair into a profitable and enjoyable experience. Sam would often look for old farm equipment while on vacation that could be placed on display at the fair, bringing that country feel to Portland. Sam retired after 17 years with Multnomah County in 1989, but continued to travel to county fairs throughout Oregon as a County Fair Commissioner.

That was the beginning of his next career. Less stress, but still creating good times working for DWA Trade Show & Exposition Services as a senior consultant, as well as Palmer, Wirfs and Associates, America's Largest Antique and Collectables Shows, for another 25 years. He loved creating events, working with hundreds of people who knew him as a friend and coworker, and seeing the thousands enjoying themselves. Years after his full retirement, Sam would be recognized and greeted warmly by former co-workers and vendors everywhere he went.

Sam's wife, Dolores, died in April of 2020. Through the years, Sam taught his children patience, the skill of fixing things, love of camping and the outdoors, humor and the importance of family. He will be dearly missed by family and friends alike.
To order memorial trees in memory of Samuel Laird Philip, please visit our tree store.