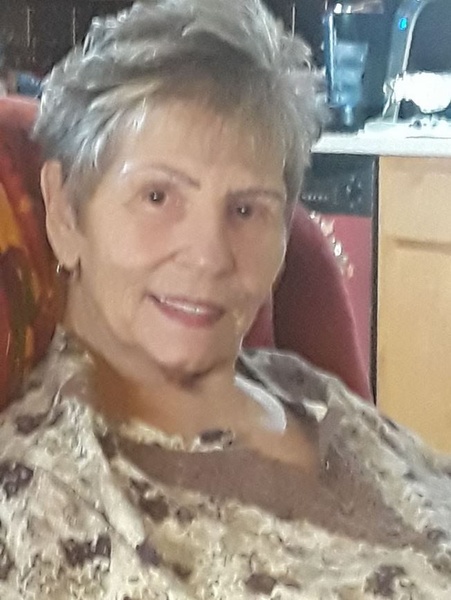 Shirley watched for Jesus in the past few months and was ready when that angel swooped in and grabbed her up on Tuesday, April 21st, 2020. She now walks the streets of heaven, hand in hand with her forever love, praising the Lord!

Shirley Kay Ribail had a small start in life at under 3 pounds on September 7, 1941. She was born at home and they put her in the warming oven and she grew into a laughing mischievous little girl. She went to St. Paul's Catholic School 1st through 8th grade, West Valley HS and then transferred in her senior year to Davis HS to graduate in 1959. She moved to Seattle after graduation where she worked at Boeing. She met John "Nick" Nichols at a Navy baseball game. He was in trouble though, because Shirley wasn't the only "babe" in the stands he was meeting after the game. When the pitcher asked him what he was going to do, he said: "I'm leaving through the outfield!" The attraction was immediate and they fell in love. They didn't have any money, but they had love and fun and some of their favorite memories were about splitting a hamburger, dancing in the streets if they liked the song and spending every minute they could together. Their whirlwind romance seemed to end when he got his orders to ship out just a few weeks later. They returned the high school rings they had exchanged and said if it's meant to be then it will be. He barely made it to San Diego before he called Shirley's dad asking to wed. Bob said: "Okay, but you can't give her back!" They were married on December 3, 1960. They decided to wait to have kids and 10 months later a daughter was born. Upon release from the Navy in 1964, they moved to Virginia to reunite with his family. They returned to the Northwest in 1967. In 1969 a son completed their family. Nick was employed with the Bureau of Indian Affairs and then the Bureau of Reclamation. Shirley was a hard worker, no matter the job. She worked circles around most people. She was a realtor and also worked in retail until they retired in 1994. They had a special relationship, held hands and laughed together for over 54 years until Jesus took Nick in 2015. Shirley never quite recovered from the loss.

She is proceeded in death by her husband: John Nichols; parents Robert and Doris Ribail and Andy and Fern Nichols; sister-in-law Jill Ribail and great nephews Curtis Rehfield and Ta' Garza. She is survived by her children, Christina and Daniel Eliades and John Nichols, Jr; and beloved grandson, Jordan John Eliades. She was an inspirational person and taught us how to laugh at ourselves, be a good friend, and love family. Her siblings include: Daniel Ribail, Lea and Ed Spigler, Lorri Marsh, Virginia Cheek, Lorene Blevins, William and Robin Nichols; numerous nieces and nephews, and friends too numerous to count.

She loved to play cards and games of any kind, quilting, camping, baseball and traveling the USA in their motorhome to visit family and friends. She belonged to a bridge group for over 40 years, attended EVERY family function, and kept a perfect house. She met Jesus in 1977 at Terrace Heights Baptist Church and gave her life to Him. There are so many that loved her and we know that it was because of her laughter and love. Life wasn't always easy or perfect but she always had hope for a happy tomorrow. There was always something to laugh about. It would be hard to find someone that doesn't have a "Shirley story." Many mourn her passing as she spread her joy in life to many friends and church family members. She could talk to anyone and often did. Our hearts are broken, but our faith in God says that we will be reunited one day and for that we are thankful. Until that day we carry you in our hearts with your laughter ringing in our memories. How will we go on without you Mom?

In lieu of flowers please make a donation to the Terrace Heights Baptist Church in Shirley's memory. Or better yet -- attend a Sunday service. She would have liked that!
To order memorial trees in memory of Shirley "Squrl" Nichols, please visit our tree store.