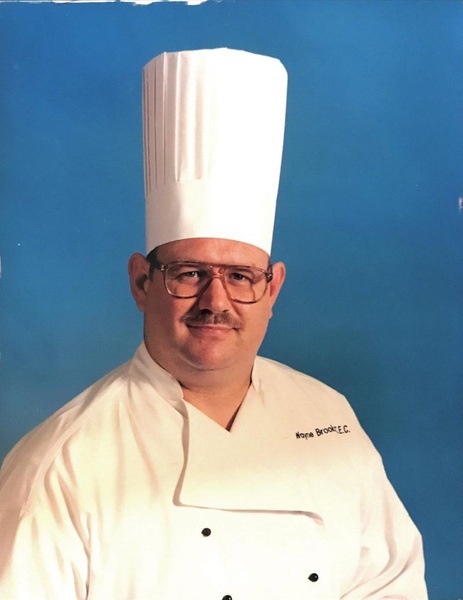 Wayne Frederick Brooks, age 65, died on June 1, 2019 at his home in Indio, California. Son of Bonnie June Boone and Marshall Frederick Brooks, Wayne was born in Cairo, Illinois on November 28, 1953. Wayne grew up in the St. Louis area, primarily Webster Groves, but he valued the rural roots of his family in the hills of southeast Missouri.

Wayne was born into a large family of educators and followed that path to Central Missouri State College where he graduated with a BSE in Industrial Arts and Technology. There he also met and married his wife of 44 years, Marilynn Mock.

After two years in the classroom, Wayne decided to pursue his childhood dream of becoming a chef. His summers during college working in a resort restaurant in Estes Park, Colorado had reignited his culinary passions.

Wayne followed his summer mentor to the Palm Springs, California area and began "hands-on" training that led him to a career that spanned more than 40 years in restaurants, country clubs, and hotels. His educational background made him a valued leader and a mentor for many over the years. He capped his career upon semi-retirement by becoming an adjunct instructor in the Culinary Arts Program at College of the Desert. Such is the circle of life.

Preceded in death last fall by his mother, Bonnie, and many years ago by his father-in-law, Perry Mock, Wayne is survived by his father, Marshall; his mother-in-law, Lucille Mock; his wife, Marilynn Brooks (Indio); his daughter, Amanda Reig and her husband, Michael (Phoenixville, PA); and his son, Andrew Brooks and his wife, Jenna (La Verne, CA). The "apples of his eye" were his four grandchildren: Cora Reig, Caleb Brooks, Anna Brooks, and Lena Reig. They loved their "Pops." Surviving also are his siblings: Marsha Jones (Hartzell), David Brooks, Lori Brooks, and John Brooks (Tammy) as well as his brothers-in-law: Steve Mock (Marsha) and Michael Mock (Rich). Wayne also leaves a wealth of family, friends, and coworkers across the country.

Wayne was especially proud of his work with La Quinta High School culinary competition teams that won state competitions three times and went on to represent California at Nationals. Several of the students that he mentored at LQHS are now working at Michelin Star and James Beard restaurants. He was prouder of the students than he was of himself for winning a bronze medal at the 1992 International Culinary Olympics in Frankfurt, Germany.

In August, a Memorial Service for family and friends in the Midwest was held in Missouri. On September 21st, at 10:30 a.m., a Celebration of Life for his California family and friends will be held at the Coachella Valley History Museum in Indio. The museum is located at 82-616 Miles Avenue. Donations to the American Cancer Society are suggested.
To order memorial trees in memory of Wayne F. Brooks, please visit our tree store.
Send a Sympathy Card