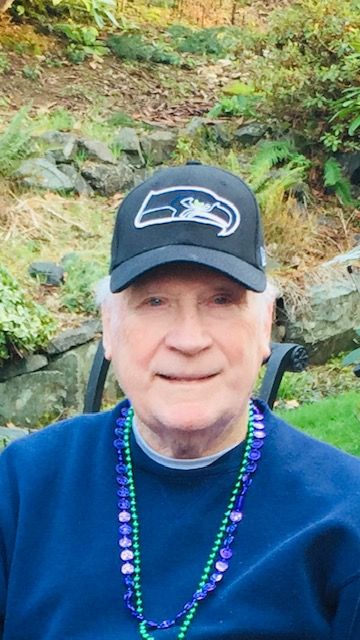 Bill passed away on July 20, 2020, at the age of 87 from complications of Lewy body dementia. Born in Blue Rapids, KS to Earl and Irene Cammel, the family moved in his early years to Tacoma, where he called home.
A graduate from Clover Park High School, he was a student athlete who had a love and passion of sports that extended throughout his lifetime.
Bill enlisted in the Marine Corps at the age of 17 and served in the Korean War. After being discharged he spent the next 35 years working at the Logistics Center on Fort Lewis in which he retired from in 1989.
Bill married his first wife Carol, they had two children, Mike and Sue.
He later married Sharon and brought her four children into the family in 1978.
In his early years, Bill was active in the Lakewood Elks #2388 and held the role of Exalted Rule where he was involved in fundraising for charitable programs for veterans and the disabled.
A lifelong sports fan, Bill enjoyed playing softball and golf, but his true passion was watching the South Sound High Schools battle weekly. Sitting on bleachers, writing down detailed stats and cheering for all, in anticipation of the Championship games and Jamboree's that followed. He kept years of newspaper clippings, or pertinent information on file, and cataloged to chart any local standouts career, this was before the internet.
A huge supporter of Husky Football, the "ONLY" Washington team in the state to him. Bill and friends would meet up to tailgate before each home game and take the self-proclaimed, Husky Bus up to Seattle – leaving from Copperfield's, Spuds, or Cassidy's – throughout the years. Bill would always be early to ensure he was able to sign up on every "Board," and begin sharing his thoughts of the team's performance with friends.
Seahawks, Sonics, Mariners, Storm or his local favorite The Rainiers, it didn't matter – he was always aware of how they were doing and would attend when possible.
Bill really enjoyed those games where his grandchildren were playing. He would as usual, arrive early grab his chair, umbrella and a pocket full of Snickers bars then head out away from the stands to ensure he had a full vison of the field.
Bill had a love of Family, Food, Old Cars, and Country Music –his connection to his grandchildren was very special. Grandpa brought over those special needed supplies like special bats, balls, or gloves.
He made sure they were set up for success each year. Bill enjoyed family gatherings, getting together and talking about current events (he actually read the newspaper from cover to cover, daily).
His love of Country Music ran deep. George Strait, George Jones, Merle Haggard and Alan Jackson to name a few. In 1956, Bill purchased a brand new Ford Victoria, his only demand was that it had a Continental Kit. Years later a 1963 Thunderbird became his daily driver. Bill enjoyed great food, Sharon's cooking and event dinners hit the spot every time. Chocolate desserts were his favorite, and he was a willing tester of any new dessert that was put in front of him.
Bill was preceded in death by his parents, siblings Fran and Nancy, as well as his children, Mike and Sue.
Bill is survived by his wife Sharon, stepchildren Kim (Chantel), Tracy, Michelle (Brian) and Donny; grandchildren Chad, Travis, Julia, Billy, Mitchell, Taylor, and Nathan. He also has 8 great-grandchildren.

If you wish to make a donation in Bill's name – Contact Lakewood Elks #2388 at 253-588-2388
To order memorial trees in memory of William Joseph Cammel, please visit our tree store.
Send a Sympathy Card