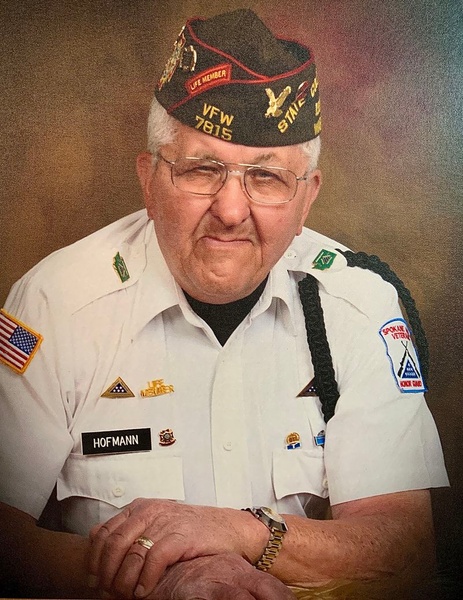 William Gerald Hofmann passed away peacefully with his wife by his side on June 25, 2021.   Bill was born February 26, 1933 at Deaconess Hospital in Spokane, to William and Ramona Hofmann.   He was raised on the family farm and graduated from Rosalia High School in 1951.

After High School, Bill briefly attended Washington State University before enlisting in the Army.   He served during the Korean War and was honorably discharged in 1955.   Shortly after returning to the family farm, he met the love of his life, Alice Bacca, in Colfax, and they were married in 1957.   They had three children; Terri was born in 1959, Gary in 1962, and Keith in 1964.

Bill was a doting father who spent countless hours with his children.   It didn't matter if it was homework, sports, Boy Scouts or the long hours with livestock projects, he always made time for his children.

When Bill wasn't involved with his children's activities, he was a member of the Rosalia Lions Club and Spokane VFW.   His involvement at the VFW led to many years as a member of the Color Guard at local parades and services for fallen comrades.

A graveside service will be held at the Rosalia Evergreen IOOF Cemetery on Saturday July 10, at 11am.  Reception to follow at the Holy Rosary Catholic Church Hall.   Memorial contributions can be made to the Rosalia Fire Dept, Hospice House of Spokane, or the Shriners Hospitals for Children in Spokane.
To order memorial trees in memory of William Gerald Hofmann, please visit our tree store.