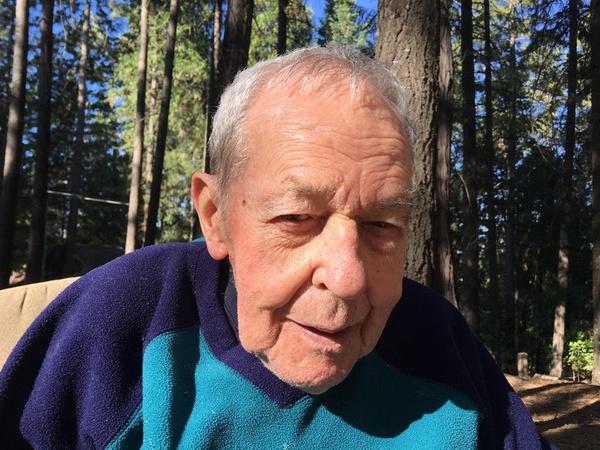 William (Bill) V. Wagner, Jr. passed away peacefully at the age of 96. Born and raised in upstate New York, Bill was the eldest of three children. His parents Helen and William V. Wagner, Sr., and sister Kathryn (Luise) Piane are deceased.

Bill attended Cornell University on a full scholarship and graduated with honors, completing a B.S. in Chemical Engineering. He was a Veteran who served time in the Army stationed in London and Germany during WWII.

He spent seven years working for Saudi Aramco helping to start a refinery. In 1958, he relocated to Orinda, Ca., where he and his wife raised four kids and spent the remainder of his career working for Standard Oil (Chevron). He retired to Pioneer, Ca., for thirty years, and spent his final days in the Bay Area.

Bill served on the CAMI (California Alliance of the Mentally ILL) board for 15 years. He volunteered as a docent at Carson Pass in the Sierra Nevada, part of the El Dorado National Forest. He enjoyed spending time with friends and family and was an advocate for many causes such as NAMI-California, Doctors Without Borders, Spirit in Action, and The Nature Conservancy to name a few.

Predeceased by his wife of 65 years Margaret (Peg) Waldron Wagner (2015), their son Alan(Rob) Wagner (2015), and daughter Mary Wagner (2011), Bill is survived by daughters Emily (Mark) Hopkins of Martinez, Ca, and Elaine (John) Braisted of Gahanna, Ohio. In addition he is survived by his brother Jacob (Art) Arthur Wagner, several nieces and nephews, and cousin Margaret Harvey and family.

Along side of his wife, Bill will be interred in the Sacramento Valley National Cemetery located in Dixon, Ca. In lieu of services, please consider making a tribute to William V. Wagner Jr., with a donation in his name to: American Friends Service Committee - www.afsc.org, NAMI California - www.namica.org, The Nature Conservancy - www.nature.org, or a charity of your choice.
To order memorial trees in memory of William Valentine Wagner, please visit our tree store.